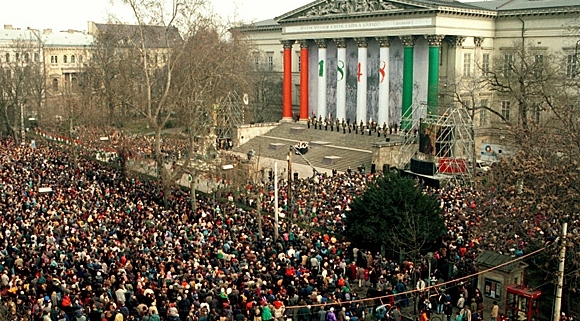 You’re walking around the streets of Budapest and it’s the 15 th of March. There are people everywhere with red-white and green Hungarian flags in their hands or pinned up on their coats, commemorations, celebrations are going on everywhere, most of the shops are closed and you wonder why. Let us tell you!

On one hand March the 15th is a national holiday in Hungary when we do not have to go to work (except for tour guides, but we are glad to guide you around Budapest on our free walking tours on holidays as well), so most of the people like this date. On the other hand, it is one of our most important national holidays, since it is the anniversary of the outbreak of our 1848-49 revolution against the Habsburg ruled Austrian Empire. To put things into context, you must know that Hungary was occupied many times during its roughly 1100-year long history in Europe. From the 1540s till the 1680s the Ottoman Empire was our guest, then we were liberated by a Christian army led by the Austrian Empire in the second half of the 1600s.

After the liberation we weren’t set free, Hungary became part of the Austrian Empire. We organized some uprisings against them earlier as well, but the 1848-49 revolution was the most important one. In 1848 revolution was in the air across Europe. The revolution in the Kingdom of Hungary grew into a war for independence from the Austrian Empire, ruled by the Habsburg dynasty. After a series of serious Austrian defeats in 1849, the Austrian State came close to the brink of collapse. Thus, the new young emperor Franz Joseph I had to call for Russian help in the name of the Holy Alliance. Czar Nicholas I answered, and sent a 200,000 men strong army with 80,000 auxiliary forces. Finally, the joint army of Russian and Austrian forces defeated the Hungarian forces.

After the restoration of Habsburg power, Hungary was placed under brutal martial law. However, in the 1860s Austria made a Compromise with Hungary. This established the dual monarchy of Austria-Hungary and partially re-established the sovereignty of the Kingdom of Hungary, separate from, and no longer subject to the Austrian Empire.

On the 15th of March you can visit many museums in Budapest for free. Like we mentioned before, even though it is a holiday, we still run all our free walking tours, so if you decide to do some Budapest sightseeing on this day, do not hesitate to join our free tours on the Vörösmarty square and learn more about our history from our great guides!