When you wander around the streets downtown Budapest watchfully with our free walking tours or on your own you can discover some small wonders… the mini, guerrilla statues of Mihály Kolodko, a Hungarian-Ukranian artist. Get to know more of him and his work in this blog article! 🙂

Mikhail Kolodko was born in Transcarpathia as a son of a Hungarian mother in 1978. In 2002 he graduated from the Lemberg Academy of Art as a sculptor. He was basically interested in monumental sculpture, but this genre was more typical of the period of the Soviet Union, where great, admirable works were favored. Initially, he made public sculptures as he studied plan air art, both individually and in groups. Most of his sculptures are in Uzhhorod, but after he moved to Hungary in 2017, his works were published here as well.

His first small statues appeared on the streets of Uzhhorod and were initially welcomed, when people got used to them, they really liked these works of art. The creation of small sculptures stemmed from the fact that sculptors must make a small version of large sculptures first. The artist did not always have a client to buy his designs, and thus, in the absence of financial means to keep his ideas going, he made a small version of the statues.

When he moved to Budapest with his family, Kolodko first made a statue of Főkukac The 15 cm statuette is opposite the Parliament at Halász Street. Kolodko’s favorite childhood fairy tale character came to life with this little statue: he wanted his children to see him as Kolodko did in his childhood. It was important to him because he learned Hungarian while watching this tale in TV. 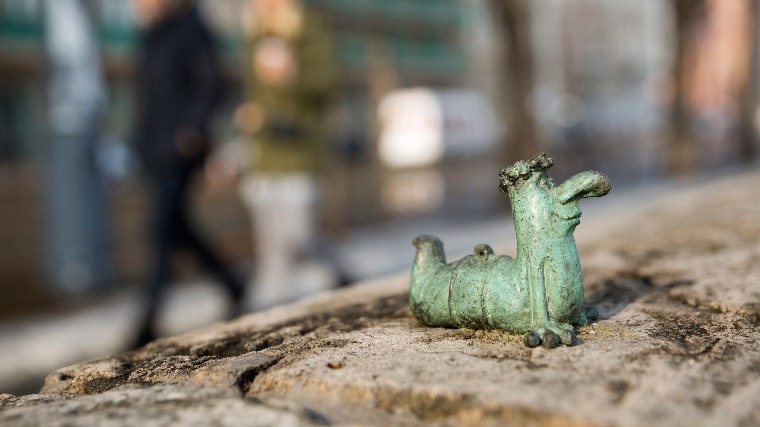 The tiny statues soon gained popularity, so much so that some were stolen several times. The reason why we call them guerrilla statues is that they were placed to public spaces without a permission (there was actually no regulation for this first).

Let’s see some more examples of mini statues on the streets of downtown Budapest including some that have been made after a the city council of Budapest commissioned them.

At the intersection of Dohány Street and Osvát Street, we find one of the newcomers, based on the urban legend about the New York Café. According to the myth, Ferenc Molnár, one of the greatest Hungarian writers of the 19th and 20th century, solemnly threw the key of the café into the Danube after the opening so that it would never be closed again. This is evoked by a diver placed on the top of a hydrant, holding a key in his hand – Kolodko wanted to refer to the water with placing the statue on the hydrant. 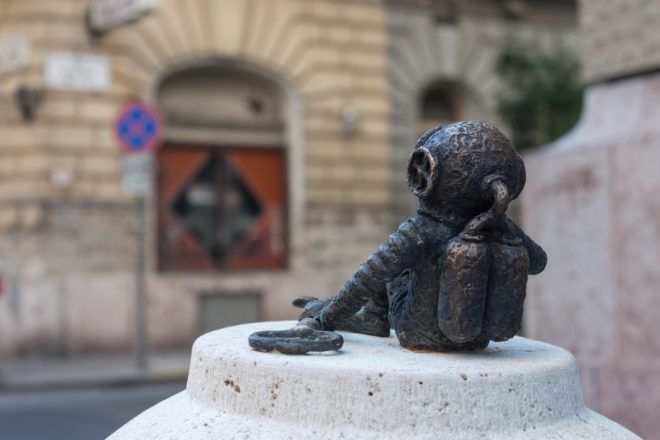 Very close to the Dohány street synagogue, on a lamp post you can find the statue of Theodore Herzl (Herzl Tivadar in Hungarian) who was a Jewish Austro-Hungarian journalist, playwright, political activist, and writer who was the father of modern political Zionism. Herzl formed the Zionist Organization and promoted Jewish immigration to Palestine in an effort to form a Jewish state. Though he died before its establishment, he is known as the father of the State of Israel. He was born in a building next to the synagogue. 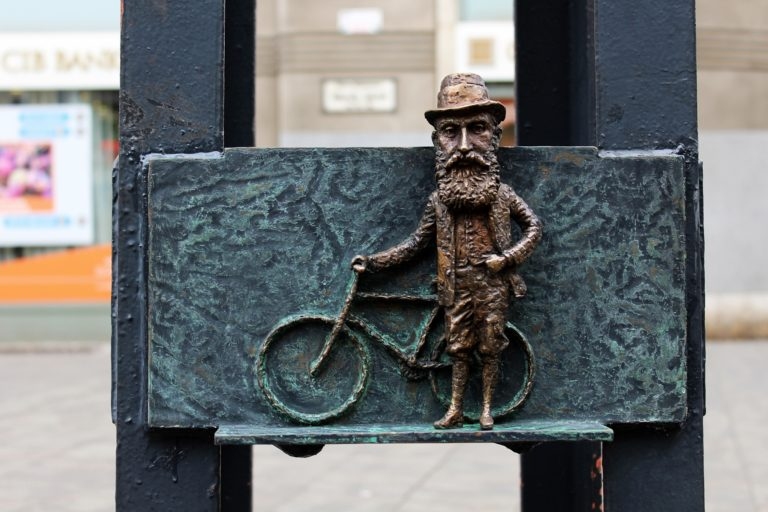 The miniature of Rezső Seress, the world-famous composer of Gloomy Sunday, was also created by Mihály Kolodko. The work of art is located in front of the musician’s former residence in Akácfa street in the Jewish quarter. The song, Gloomy Sunday soon became known as the ‘suicide anthem’, as they repeatedly found the sheet music of it at places where those who had killed themselves passed away. The glamorous song has been sung by many around the world, including Billy Holiday, Serge Gainsbourg, Elvis Costello, Björk and Portishead. 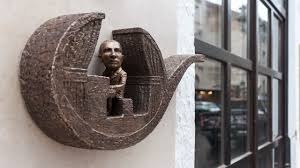 We actually see some of these mini statues on some of our daily free tours like the Urban and street art tour, do not hesitate to ask your guide about them! 🙂

Because these cookies are strictly necessary to deliver the website, refusing them will have impact how our site functions. You always can block or delete cookies by changing your browser settings and force blocking all cookies on this website. But this will always prompt you to accept/refuse cookies when revisiting our site.