As we wrote in one of our previous posts, due to the rising number of Covid-19 cases in Hungary, foreign citizens are not allowed to enter our country from the 1st of September for an indefinite time (there are a few exceptions and special cases).

You can read more about the latest here: www.abouthungary.hu

We run no daily free tours now, but join us for a private tour!

Unfortunately, our daily free walking tours are not running at the moment until further notice, but if you happen to be one of the exceptions that can enter the country, we are happy to organize a private tour for you! For more information and prices please send us an email to info@heedesign.hu or call us +36209605295

You can check our Facebook page as well for fresh information: https://www.facebook.com/triptobudapest.hu/

We really hope that the Covid-19 situation gets better and we can see you soon on our daily Budapest walking tours!

In this post we would like to let you know the starting times of our free walking tours in Budapest and some recent news about the Covid-19 situation and upcoming restrictions.

The schedule of our daily free tours now

Here are some photos of our running 1.5 hours long Evening Pest walk 🙂 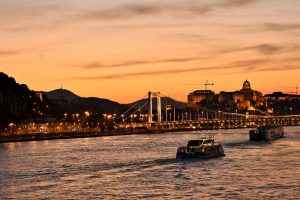 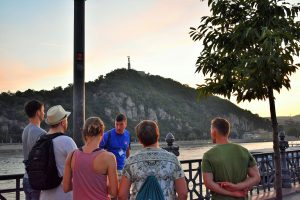 Information about the pandemic now

The number of cases have been quite low in Hungary, we are considered to be a safer country.

However, these last days news said that the government is going to announce safety restrictions, probably in connection with travelling as well. We are going to keep you updated about these on our website and Facebook page, too. https://www.facebook.com/triptobudapest.hu

Right now the countries of the world are divided into 3 groups by Hungary: green, yellow and red. If you come from a green country, you are free to enter. If you come from a yellow country, you have to go to 2 weeks quarantine in Hungary OR show 2 negative tests. Entering Hungary from a red country is not permitted (there are only a few exceptions).
Please always look up the regulations before you plan your travels and be safe!

In the following post we are going to introduce our new, safe walking tours that you can take during/after the Covid-19 pandemic after we restart our daily tours (probably late-July or beginning of August 2020).

Life is slowly returning, travelling can be done soon with minor restrictions, and we are also preparing for restarting our walking tours. Besides our free walking tours and private tours, we have prepared low-cost, small group walking tours for our guests. The advantages of these tours are the following:

The walking tours that will be available as a small group tour: General Budapest Tour, Jewish Quarter Tour, Communism Tour. The days, times and prices of these tours will be announced later, when we are sure about the date of starting again (probably late-July or beginning of August 2020).

Until we restart our daily free tours, you are welcome to book a private tour with us here on the website for a fair price. You can also e-mail us at info@triptobudapest.hu or booking@triptobudapest.hu for more information!

Dear Everyone, we hope that you are doing okay as much as things can be going okay during these difficult times.

We just wanted to let you know that we are alive and cannot wait to be with you on our free tours and other kind of walking tours in Budapest again!

We are preparing new options as well for life after the Covid-19 pandemic. Besides our free walking tours low-cost, small-group walking tours will be available as well for those who would like to avoid crowded walking tours. We will guarantee small groups of maximum 10 people, this way everyone can keep distance from fellow travellers and still hear the guide during the whole tour.

During the time when we cannot do walking tours yet, we are also making a photo sequence, we take pictures of statues in Budapest wearing a mask. Here is the first two of these photos:

The Little Princess sitting on the Danube Promenade. The original 50 cm statuette of the Little Princess (Kiskirálylány) in Budapest, Hungary was created by László Marton (1925–2008) Munkácsy- and Kossuth Prize-winning sculptor in 1972.The artist was inspired by his eldest daughter who often played wearing a princess costume and a crown made out of newspaper by her father, pretending her bathrobes were a mantle. This image prompted her father, the artist in the creation of this little statue. A larger copy was placed on the Danube promenade in 1990. The special thing about this version is that Hungary just went through the regime change, Communism ended, and Democracy started in 1989. They removed most of the statues of the Communist period from the inner city of Budapest and this Little Princess on the Danube Promenade was the first statue that did not depict a Communist leader, politician, a Soviet soldier or a muscular worker, but it depicted a little girl without any ideological meaning. You can see a copy of the same statue in Japan – that was donated by the artist – in front of the Tokyo Metropolitan Art Space cultural centre’s concert hall. The original statuette (1972 version) is owned by the Hungarian National Gallery. 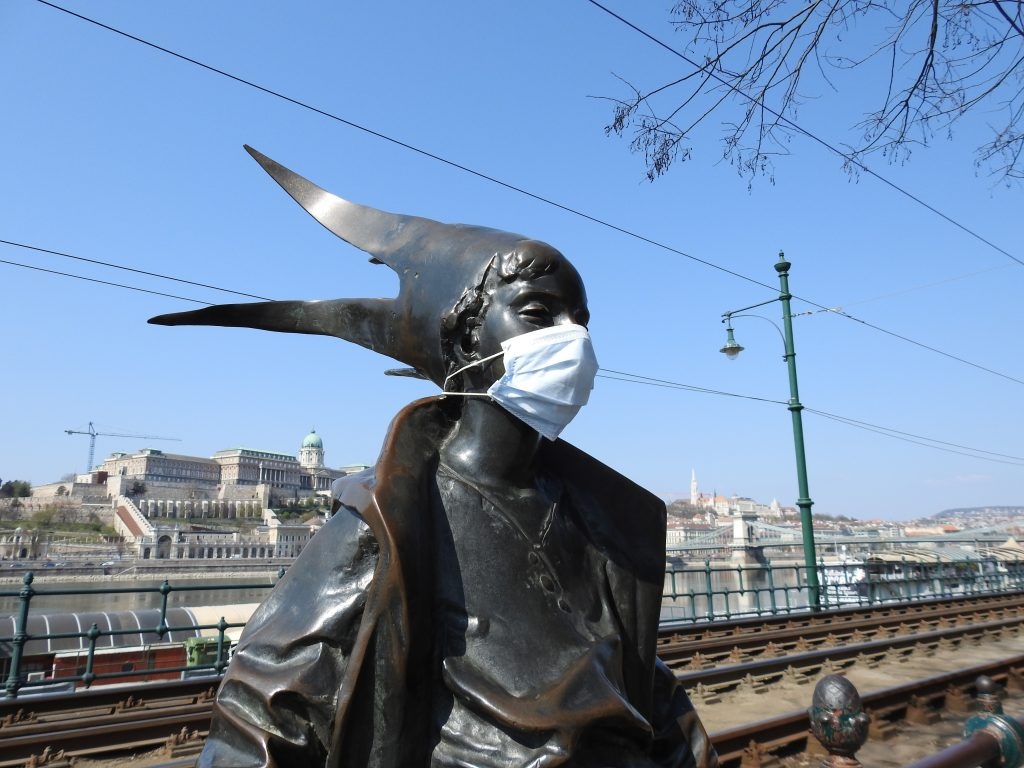 The next one is Ferenc Puskás or Pancho as they call him in Spain. He was the greatest Hungarian football player ever; with his “Golden team” they were unbeaten for 4 years, between 1950 and 1954 and they won the Olypics as well. In 1953 they played a legendary game against England in the Wembley Stadium and the Golden team won for 6:3.

Later Puskás played in the Real Madrid then he was a coach in many countries like Greece, Australia, Egypt, Paraguay, Chile… In 2004 he was listed as one of the best football players of all times by FIFA and in 2019 he got the posthumous honor of the “World Sports Legends Award”. You can find this group of statues a little bit out of the city centre of Budapest, in Óbuda (Old Buda). 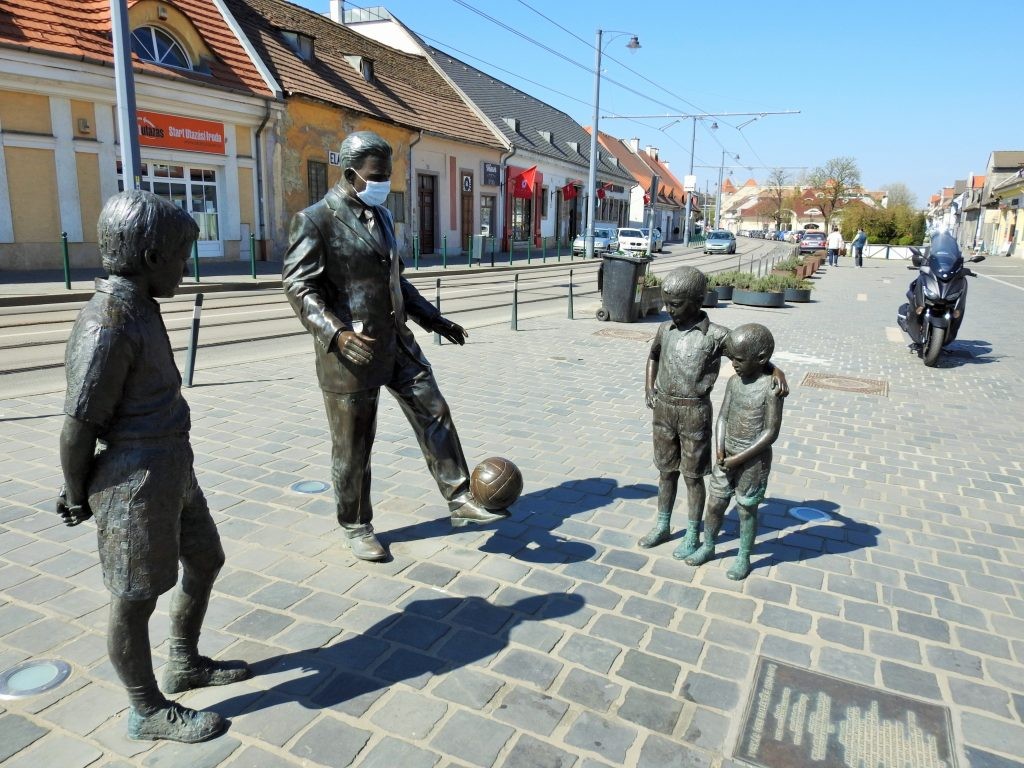 Here you can read about our tours and the latest news and measures in Hungary in connection with the coronavirus situation.

FIRST, LET’S SEE WHAT IS HAPPENING WITH OUR TOURS:

All our free walking tours and private tours are operating now, until further notice. We update our Facebook page regularly, when there is any news, you can follow us here: https://www.facebook.com/triptobudapest.hu/

Outdoor walking tours are one of the safer activities that can take place during these times and for this reason, we’re not cancelling any of our tours right now, but still taking precautionary measures to try and limit the spread of the virus.

We also emphasize the following: please limit person-to-person contact, do not shake hands with your fellow travellers for now and try to keep some distance as well.  Buying hand sanitizer has become a serious “sport” and competition in Hungary, too, but if you can please have it with you all times and/or wash your hands with soap and water as often as you can. During our general Budapest free walking tour, there is a bathroom break when you can do this. At the end of our other free tours there are also nearby public toilets.

MEASURES THAT HUNGARY HAS TAKEN SO FAR:

Stay safe and tuned, we are going to keep you updated about our tours continuously!